San Lorenzo: A night of stars and wishes 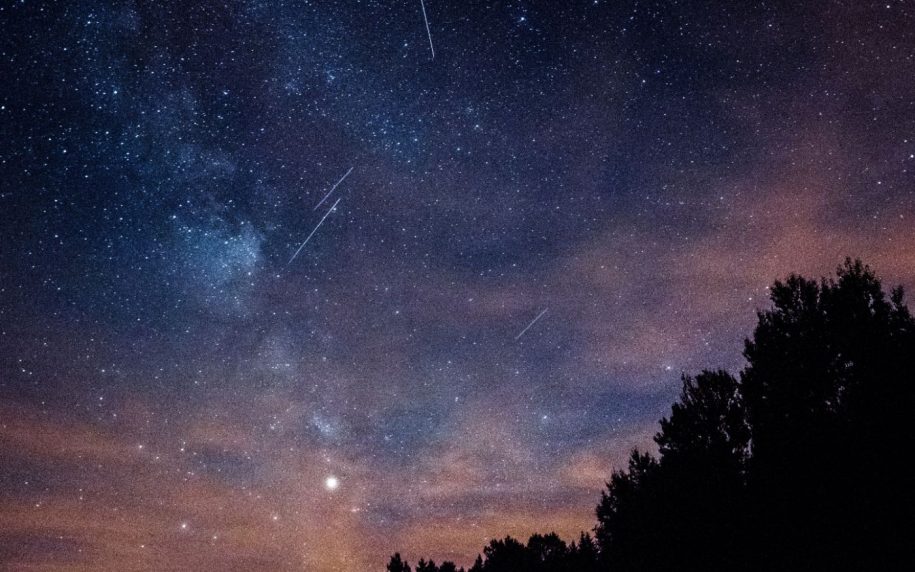 “Do you remember still the falling stars

and suddenly leaped across the hurdles of our wishes-do you recall?

There’s one night in Summer when you’ll find most Italians looking up at the sky. Lying down, arms stretched in the air indicating where the last shooting star appeared. Or their necks craned whilst standing, later complaining of cervicale (an entirely Italian ailment). Along the beach, perched on a mountain top or scattered across the countryside, all trying to make their wishes come true one star at the time. It’s the Night of Saint Lawrence and it falls on 10th August. For a few nights around this date, astronomy becomes a national pastime as the Perseid meteor shower crisscrosses the Italian sky.

La Notte di San Lorenzo, as it is known in Italy today, is a celebration dating back to Roman and Etruscan times, if not earlier. Catholics marked this day in remembrance of the martyr, believing the falling stars represent the tears of the holy and the embers of the fire that burned him, thus originating a saying “San Lorenzo dei martiri innocenti, casca dal ciel carboni ardenti” (Saint Lawrence of innocent martyrs, hot embers fall from the sky).

This shower of stars is caused by the particles of the Swift-Tuttle comet entering our atmosphere on the Earth’s annual orbit through its path, nevertheless, Italians don’t let science spoil this magical night. Millions still flock as far as necessary to have enough darkness to gaze at the sky. And under their breath utter “Stella, mia bella Stella, desidero che…” every time a falling star sparks across the sky, making a wish.

If you’re vacationing in Italy during this period (or intending to), schedule in a night between 10th and 12th of August to stargaze. Renting a villa in Tuscany or Umbria is one of the best ways to make the most of this natural show. Far enough from city lights and with unobstructed views of the countryside, rural villas are ideal for hosting a stargazing party or a romantic evening.

A poolside meal with a 5-star wine list that’s a match to the sky above you, it’s a sure-fire way to a stellar time.
Whether you prefer meat, fish or neither, you can’t go wrong with a barbecue dinner. Grill some Chianina meat, bred near Arezzo and one of Italy’s best, or choose Lake Trasimeno perch fish (Pesce Persico). As a side, or a main for the vegetarians and vegans out there, plenty of vegetables are in season in August, think juicy tomatoes, eggplants, bell peppers and zucchinis. Consider also cheese, a fresh mozzarella braid is equally delicious after a couple of minutes on the grill (caciocavallo and scamorza are also good options).
Alternatively, put into practice the pizza-making skills you’ve learned during your holiday (book a class with us!) with your own wood-burning oven (get in touch to know more).

For the future astronauts

If you’re travelling with your little ones, a stargazing party turns into a learning opportunity, without forgetting all the fun. Kiddos can keep a tally of how many stars they’ve caught whilst grown ups can recount all the constellations myths. Cygnus, Aquila, Lyra, Sagittarius and Scorpio are particularly clear in August in the Italian sky.
And why not make some star origami in theme with evening? All you need is a sheet of paper. And for a gluttonous take on astronomy, one can build constellations out of gummy sweets and toothpicks.

The best spots to stargaze near Cortona

If you’re more town than country and decided to rent an apartment, you may need to move outside the city walls for clear skies. Any spot that’s safe and fairly remote from any light pollution is a good spot, but since we’re specialists in Tuscany and Umbria, here’s our list of the best ones near our home-base Cortona:

Chiesa di Santa Margherita
Dating back to the IX century, this stunning church was built on a hill overlooking the town of Cortona. Because of its location and the ample esplanade in front of it, this can be a good spot for some light stargazing.

Fortezza del Grifalco
Not too distant from the Chiesa di Santa Margherita, the old fortress was built on the highest turf in Cortona, granting unparalleled views of the surrounding area. Arrive at sunset for a breathtaking panorama, order dinner at the Bistrot and stay at nightfall to see the stars.

Castiglion del Lago
The lakeside promenade at the feet of the magnificent castle, which gave its name to the town, is the perfect spot to catch sight of some stars.

San Feliciano
The long pier stretching into the lake is sure to be packed on San Lorenzo, make sure to get there early to grab a spot!

Passignano sul Trasimeno
Like San Feliciano, Passignano has several piers from which to admire the firmament, it also hosts a night market along the lakeshore for a spot of shopping too.

If one of your wishes is to visit Tuscany and Umbria then drop us line, we’ll make our best to make it happen!