On the footsteps of Saint Francis in Umbria 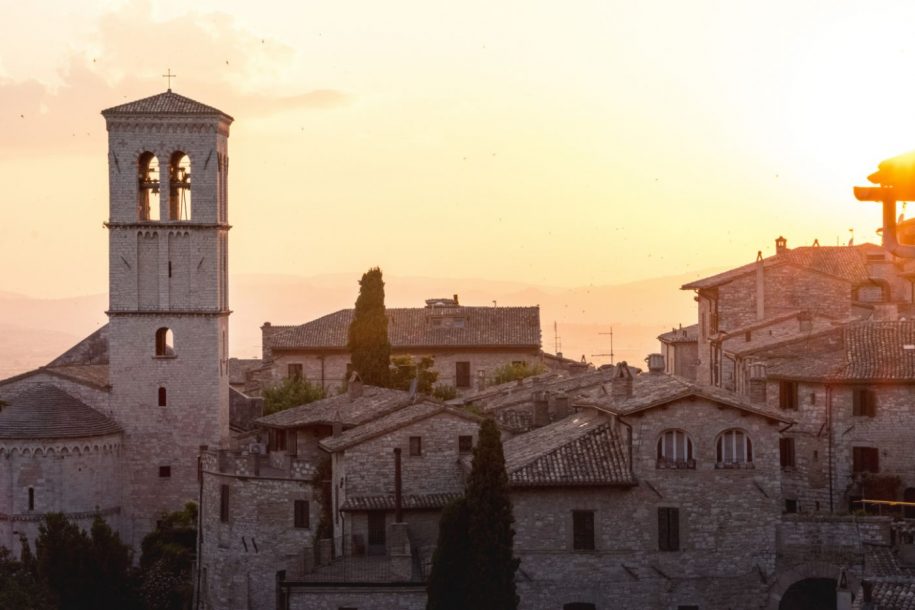 St. Francis is the saint patron of Italy and he is known all over the world for his message of peace, gratitude and humility but his story started in the Italian region of Umbria. Here, churches, convents, hermitages and many other places that marked the life of the saint can be found. Beyond magnificent Assisi, there are ancient villages, towns, woods and mountains to discover, imbued with mystical splendor.

A UNESCO World Heritage Site, the town is home to beautiful Basilica celebrating the life of the saint who was born and died here, which is the highlight of our Assisi and Deruta tour.

Part of it was first erected in 1230, later evolving in two basilicas, the lower with the crypt and tomb of St. Francis and the upper, where the world-renowned frescoes by Cimabue and Giotto grace the walls, recounting the life of the saint.

A Romanesque church, it is where St. Francis was baptized. Delicate high reliefs decorate the stone walls and three elaborate rose windows grace the facade of the church. In August, the town unites in the church square for the Palio di San Rufino event, a historical re-enactment with a crossbow match.

Built between the 12th and 13th century, with white and pink stones from nearby Mount Subasio, this tiny church takes the visitor back to the middle ages. Almost unassuming in appearance, it retains all the mystical splendour with impressive valley views and remarkable frescoes. Tradition has it that the bells played continuously in the hour of agony and death of St. Francis.

Just outside of Assisi, this peaceful hermitage was St Francis’ refuge for meditation and prayer retreats. At a stone bridge, the oak where the birds St.Francis preached to, as the legend tells, still exists. It is an idyllic site with almost otherworldly panoramas, enchanting to visit any time of the year.

Inside the majestic structure of the Basilica, a small medieval church called Porziuncola, is the original place where Francis ministered and prayed. It’s an incredible sight, decorate with frescoes and made in stone.

One can reach the lovely town of Gubbio from Assisi on foot or by bike, following the Franciscan Path, criss-crossing the beautiful Umbrian countryside. The charms of Gubbio aren’t limited to Franciscan sites: historical riches abound in this town, with a stunning main square and terrace overlooking the valley, renaissance palaces and Roman ruins.

Built where the saint would have pacified the wolf. The altar is the stone above which Francis would preach during war times, the reconciliation between the Guelfi and Ghibellini.

At the gates of the town, in the monumental church, restored in the seventeenth century, there are the remains of the old warehouse where the noble Federico Spadalonga gave a tunic to the saint, an old friend of his.

Umbria’s regional capital is a picturesque town imbued with history and art. It is also famous for its chocolate and delicious food, both of which can be sampled on our unique tour of Perugia, led by a formidable American guide. St. Francis stayed here as a prisoner during the war between Assisi and Perugia and it is here where he first started to contemplate how futile and unnecessary war was.

Monteripido had been chosen as a place of retreat and meditation by the blessed Egidio of Assisi who died here in 1262. His cell today has become a small chapel. The convent was also a cultural center with a library that at the end of the eighteenth century was one of the largest and most important in Italy for Franciscan theological studies.

One of the most beautiful places in the city, the ruins of this 13th-century church, with a white and pink stone facade from Mount Subasio, has been the stage for many concerts during the Umbria Jazz festival. At present, renovations are underway to turn it into a modern auditorium for shows. Next to it, there is the delightful Renaissance-era oratory of San Bernardino with sculptures by Agostino di Duccio.

This enchanting, pedestrian-only isle in Lake Trasimeno hosted St. Francis during Lent in either 1212 or 1213. Accompanied by boat, on Ash Wednesday, St. Francis remained here alone for 40 days, eating only half a loaf of bread.

A small monument signals where the saint disembarked and made water flow from a spring.

In the last years of his life, an increasingly weak and sick St. Francis stayed several times in the village of Nocera Umbra, to cure himself with the thermal water of its springs. In the 14th century, the city dedicated a door to the saint and a church that now hosts the town museum.

When young, St. Francis intended to join the Crusaders in Jerusalem. His trip was however cut short because he fell ill and stopped in beautiful Spoleto. Here, persuaded by a nightly revelation, he decided to abandon his dream of joining the crusaders and decided to return to Assisi.

Around 1218 Francis and his disciples went to pray in huts near an ancient Benedictine church. At 800 meters above sea-level, there is a spring which it is said St. Francis made appear from a rock.

This charming village perched atop a hill is home to a museum, with a rich collection of works by Umbrian artists from the fourteenth to the eighteenth century and church, with a grandiose pictorial cycle with the stories of Saint Benozzo Gozzoli.

In the plain between Cannara and Bevagna, in Pian d’Arca, it is said that one of the Fioretti’s most famous episodes happened, the preaching to the birds. The stone where, according to a popular belief,  St. Francis stood during the sermon is in the thirteenth-century church in the village of Bevagna. Also in Cannara there is a church dedicated to him with a coat of arms of the Franciscans.

A quaint village atop a hill, Todi is full of delightful surprises beyond the Franciscan heritage, uncovered just by strolling its elegant medieval streets. Cisterns, palaces and art galleries all await the curious visitor.

In 1254, Bishop Pietro Caetani granted the Franciscans the church of San Fortunato, which then belonged to the Benedictines. Inside there is a chapel dedicated to St. Francis with a cycle of frescoes on the life of the saint, which have strong similarities, by style and composition, with the more famous ones of the Basilica of Assisi.

Famous for its ceramic-making heritage, the pleasant hamlet is a marvellous stop for those fond of artisanry. Our Deruta and Assisi tour includes a visit to an ancient workshop for the opportunity to see the ceramics decorated by hand. St. Francis stopped here with his brother and this episode is celebrated in the town’s church, with a bell dating back to 1228 when it was first rung to celebrate Francis’ sainthood.

On his last trip, returning from La Verna sanctuary, St. Francis, tired and sick, stayed in Città di Castello where, according to the legend, he healed a child from a malignant plague and released a woman from the devil. For the church dedicated to him, Raffaello painted the Virgin Mary’s Marriage, now in Milan.

Returning to Assisi, Francis also passed through Umbertide, where they decided to change the course of their trip in fear that Perugia, still in war with Assisi, wanted to take Francis prisoner. Umbertide’s Franciscan memories are related to this and other episodes. Already at the end of the thirteenth century, the construction of church began, now home to paintings of important artists like Pomarancio.
The Saint often visits Terni on his travels to Rome to meet with the Pope. Many other times he is present in Valnerina, in the Valle del Medio Tevere and Nera valleys, where he performs miracles, organizes his fraternity, assists lepers, chooses places to rest and meditate. In Terni there is a monumental church dedicated to the saint with important works of art.

Atop a hill amidst the green countryside, stands the small town of Narni, in beautiful candid stone, with tiny medieval streets, imposing fortifications and towers. Here, in the church of San Francesco, with an austere Gothic portal, one can admire votive frescoes from the 14th and 16th century. Coming from Narni, in 1213 Francesco and his comrades stopped meditating in a remote location, 568 meters above sea-level. Today, here there is the Sacro Speco complex, where St. Francis turned a water spring into wine and his comrades built a hut for him to sleep, still visible today.

In Amelia, where St. Francis converted courtesans and prostitutes, there is a thirteenth-century church devoted to him. Between Guardea and Alviano there are the remains of the hermitage of Santa Illuminata with a cave where Francesco found shelter. Inside the stone bed, there’s the inscription “lectulus B. Francisci”. In Alviano, St. Francis is said to have performed the miracle of silencing the birds during one of his sermons. To remember the fact, a chapel was built.

If you’re visiting Italy soon, contact us to arrange a personalized itinerary that includes these sites.