On the footsteps of Saint Francis in Tuscany 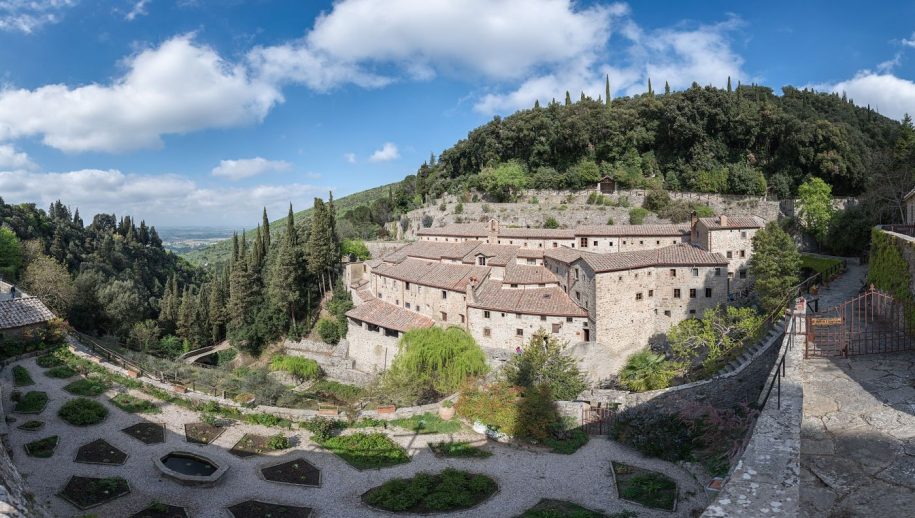 The life and story of the Saint Patron of Italy link some of the most beautiful places in Umbria (read our post) and Tuscany too. From quaint hamlets to majestic monasteries, all these sites enchant those who visit them.

It’s not hard to see why these exact location was donated to St. Francis by the Count of Chiusi in Casentino in 1213 for meditating and praying. At the stunning height of 1128 mt above sea level, the church and monastery was built on a rock formation jutting out of a mountain. St Francis stayed here for long periods and in September 1224, he received here the Stigmata. A visit to La Verna will leave you a lasting impression. The striking panorama is simply unrivalled.

The Church of S. Maria degli Angeli, dating back to 1216-17 features ceramics from the famous Andrea della Robbia; as does the Basilica of Santa Maria Assunta, built between 1348 and 1509, with a monumental sixteenth-century organ of rare quality.

The Sasso Spicco, a giant slit in the rock where the saint stood in prayer is joined by the bed of St. Francis and the Stimmate corridor, built in 1578. The Chapel of the Stimmate, dating back to the 13th century, is the most sacred place here and should not be missed. If you enjoy walking, pair a visit to the monastery with a hike through the beautiful Mount Penna forest.

On September 30, 1224, after receiving the Stimmate at La Verna, a homebound St Francis stopped in La Casella (1,263 meters above sea level) to pray. Aware that the end was near, he wanted to say goodbye to La Verna one last time, as it was visible from that spot. Today, a humble church stands here, to mark the Saint’s devotion.

St Francis often stayed at Prince Alberto Barbolani’s castle in Montauto, as he was one of his friends. To him, the Saint donated his worn-out tunic in exchange for a new one. Said tunic can now be seen at La Verna. It has been told that St Francis, wanting to reach as many people as possible for his sermons, pitched a cross at a junction in nearby Anghiari, where later a church was built (still visible today). A monastery in Montauto was also built by Prince Alberto Barbolani’s heirs.

Near the town of Pieve Santo Stefano, the hermitage of Cerbaiolo (861 meters above sea level), was built into a mountain. Its origins date back to the eighth century when, in 722, Tedaldo, Lord of Tiferno gave the Benedictine monks the church and monastery. Since 1218, the Franciscan friars took over and now reside here. It is not certain if Francis stayed here, but it is likely. It is true, however, that St. Anthony of Padua has been here. The hermitage was destroyed by the Germans in 1944 and restored by the work of a laborious hermit nun, who lived here alone until her death in 2010.

On the hills near Sansepolcro is the hermitage of Montecasale (706 meters above sea level), built in the 12th century on the remains of an ancient fortress by the Camaldolesi monks, who used it as a hospice for pilgrims and as a lazaretto. Subsequently, it was given to the Franciscan friars by the bishop of Città di Castello. Linked to this place are the episodes of the three thieves and the planting of cabbage in the garden. The first, reported in the “Fioretti”, tells that, at the Eremo, three thieves begged the friars for food and wine but were harshly sent away by the custodian. Upon his return, St Francis was upset by this and traced back the three thieves, offering them the food and wine he brought back from his journey. The thieves were so impressed by this gesture that decided to quit their criminal life to join the monks. The other episode tells that Francis, trying to test the spirit of obedience of two young men ascended to the monastery to enter the Order, took them to the garden and told them to plant the cabbages the same way he did. Francis planted them upside down and whilst one of the two did the same, the other refused.  Only one of them, therefore, was accepted into the Order. To this day, cabbage is still cultivated in the garden of Montecasale. Set in a beautiful spot, is the cloister of Sasso Spicco, a place where Francesco was said to compete with a nightingale in the song of praise to the Lord.

Enveloped by a beautiful valley and graced by a waterfall, the site of this hermitage is incredibly idyllic. It was here that Saint Francis of Assisi stayed during his journeys between Assisi and Siena or between La Verna and Siena. And since 1253, the Franciscan Capuchin friars live here. It was Friar Elias, “the bricklayer of St. Francis”, that built the hermitage around the cave where St Francis used to meditate. The first hermitage consisted of the cell of St. Francis, an oratory and eight small cells where only the bed for sleeping and a chair were placed.

If you’re visiting Italy soon, contact us to arrange a personalized itinerary that includes these sites.