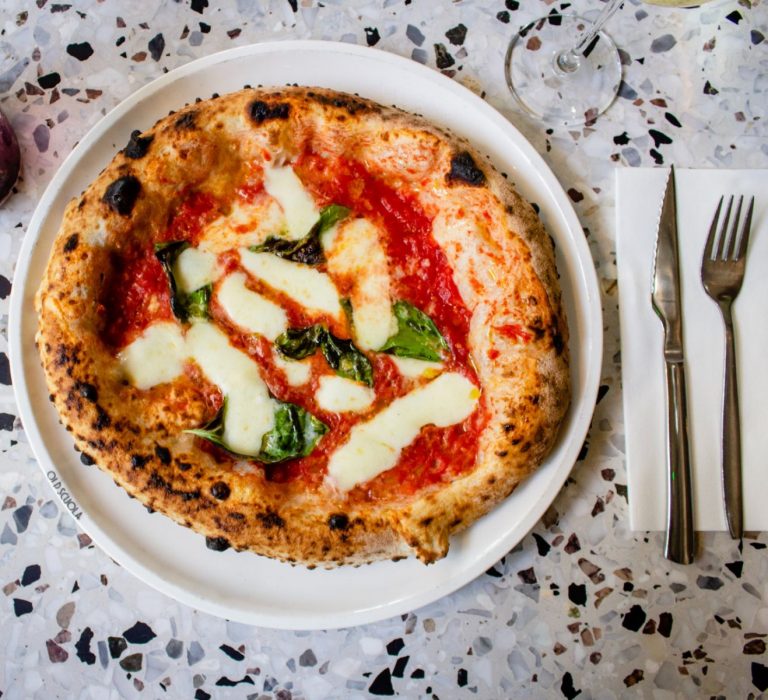 Enjoying a meal at a restaurant is one of the best things to do during a vacation in Italy. The Belpaese is known for its delicious food though sometimes it can be a bit tricky ordering at a restaurant in Italy.

Here, we share our best tips to make the most of your Italian vacation when it comes to food:

Where to have breakfast and how to order

In Italy, cafes are called ‘bars’ (bar for singular) so if you spot the ‘bar‘ sign you know it’s ok to ask for hot and cold beverages, besides cocktails and spirits. A few things to keep in mind:

Find a few useful sentences to order in Italian here.

How to read a menu and decide what to order

For lunch and dinner, an Italian menu is usually structured as follows:

Usually ‘affettati misti’ (a selection of cold, cured meats like prosciutto and salami), bruschetta and crostini (bread with a savory spread, vegetables or other) but no soup or salad.

Desserts may vary every day and are usually listed by the waiter after you’ve finished your secondo.

You can order a dish from each course, but if you’re looking for a light meal, it’s best to combine either antipasti with a primo, or a secondo and contorno with a dessert. Usually, an antipasto isn’t eaten with a secondo as they can be too similar, but you could combine a bruschetta with a meat dish for example.

At most restaurants, you’ll already find bread and grated parmesan cheese on your table. This is part of the cover charge per person, usually listed at the top of the check as coperto or pane e coperto. It should be a modest charge (€1–€2.50 per person) except at the most expensive restaurants and it most cases it includes service.

Fettucine Alfredo and spaghetti meatballs, as well as other dishes from the Italian-American tradition, don’t exist in Italy. The closest thing to fettuccine Alfredo is cacio e pepe pasta, whereas for spaghetti meatballs, order pasta with ragù sauce. There are however lasagnas and pizza, although it’s thin-crust and lighter in condiments, with no pepperoni (ask for salami instead).

It’s not usual for Italians to have sodas or drinks other than water and wine during their meal. Most restaurants will have beer, coke and orange soda but Italians pick those only if they’ll have pizza. Cocktails and liquors are reserved for: aperitivi (before-dinner drinks) and digestivi (after dinner drinks).

After a meal, the waiter may ask if you want an espresso and then if you also want either an amaro (bitter liquor) or limoncello as digestivi.

The most common dressing is olive oil and vinegar, there’s no salad dressing, french or ranch dressing, or other sauces altogether. If you think olive oil and vinegar is too bland, remember that Italian olive oil is stronger than what’s exported, as is the vinegar. Dishes are also cooked with more herbs and chili is used often. Grated parmesan cheese is used only on pasta without fish, as Italians don’t think the two pair well. Italians also take their food as listed on the menu, they don’t often make special requests as ‘dressing on the side’.

Americans often complain about the flavor of plain Tuscan bread, as it’s made without salt. But that’s just because they don’t know that in Italy, table bread is more of a utensil than an eat-alone food. It’s often used as the main tool to fare la scarpetta (do the little shoe): the action of mopping up any delicious-ness left on your plate after a meal, or whatever your fork can’t pick up during one.

If you’re looking for something quick to eat, instead of a sit-down meal, head to a bar for a sandwich. Bakeries often have sandwiches and pizza too (look for panetteria or panificio).

Regional specialties to try in Tuscany

The first rule of eating well in Italy is to know which fruits and vegetables are in season, so to always choose the dishes with the freshest ingredients. Check this handy calendar before your holiday to be prepared. If you’re staying at one of our homes, you’ll find a calendar there as well.

A popular antipasto in Tuscany is crostini al fegato or bread with chicken liver pate. Whilst it doesn’t sound too appetizing, we assure you it most definitely is. Different varieties of bruschetta (with tomatoes, vegetables and/or cheese) are also common as are affettati. On this cured meats platter one can find prosciutto, finocchiona (salami with fennel), lardo di colonnata (lard), salamino (thick salami). Affettati can be paired with a cheese platter often including Pecorino cheese from Tuscany, caciotta, parmesan and other hard or semi-hard cheeses.

For a primo, pasta is the most popular choice. Pici are a traditional type of pasta, often served with truffle and butter. Pappardelle alla lepre (wild hare) or al cinghiale (wild boar) are also a regional specialty.

During summer, pappa al pomodoro and panzanella are two popular options, both made with day-old bread soaked in either tomato or oil, water and vinegar. Again, it doesn’t sound too appealing but they both are delicious. Day-old bread is also the staple for winter soups, the most famous being ribollita.

Game and meat are the winners of secondi, with bistecca alla fiorentina taking the cup. This t-bone steak is from Chianina meat local to Tuscany and grilled to perfection. Grilled and barbecued meats, in general, are staples of Tuscan cuisine, with rostinciana being the most traditional (pork cutlets).

Freshly-caught fish can also be found, usually simply served roasted with potatoes. The price of fish dishes is often given by weight (before cooking), so the price you see on the menu is for 100 grams of fish, not for the whole dish (an average fish portion is about 350 grams). In Tuscany, bistecca alla fiorentina is also often priced by weight (€4 for 100 grams or €40 for 1 kilogram [2.2 lbs]).

Desserts change daily at restaurants and usually include homemade pies, butterscotch pudding, tiramisu, ice cream and sorbet, but the most traditional way to end a meal in Tuscany is cantuccini and Vin Santo. Cantuccini are what Americans call biscotti and Vin Santo is a sweet wine that pairs really well with them, so much so that people dunk them in it.

Norcia, in Umbria, is the birthplace of the ancient art of butchery, and Spoleto is home to the treasured black truffle. Expect then a flavorsome cuisine, hearty and tasty.

Whilst in some ways it isn’t that different from Tuscan cuisine, for example in the dishes served for antipasti, it’s the produce that makes it unique.

For a primo, probably the most typical pasta dish is strangozzi, often served with black truffles. Other pasta dishes include umbricelli in salsa di Trasimeno, a fish-based sauce made from lake perch fillets, shallots, garlic and chilli pepper.

Among the region’s most traditional secondi is Terni’s colombaccio selvatico, turtledove cooked on the spit and gallina ubriaca, chicken cooked in plenty of good Umbrian wine. Umbria is landlocked but Lake Trasimeno abounds with fish such as carp, trout, mullet, pike, and perch. Tegamaccio is dish between a fish soup and a rich stew, made with all the types of fish that are found in the lake, cooked in olive oil, white wine and aromatic herbs.

Umbria is known for its chocolate but other desserts include panpepato (fruitcake), pinoccate (pine nut cookies) and serpentone (a serpent-shaped sweet made of ground almonds, flour and sugar).

Overall remember to take your time and truly enjoy your meal. In Italian, lunch and dinner aren’t rushed. Buon appetito!