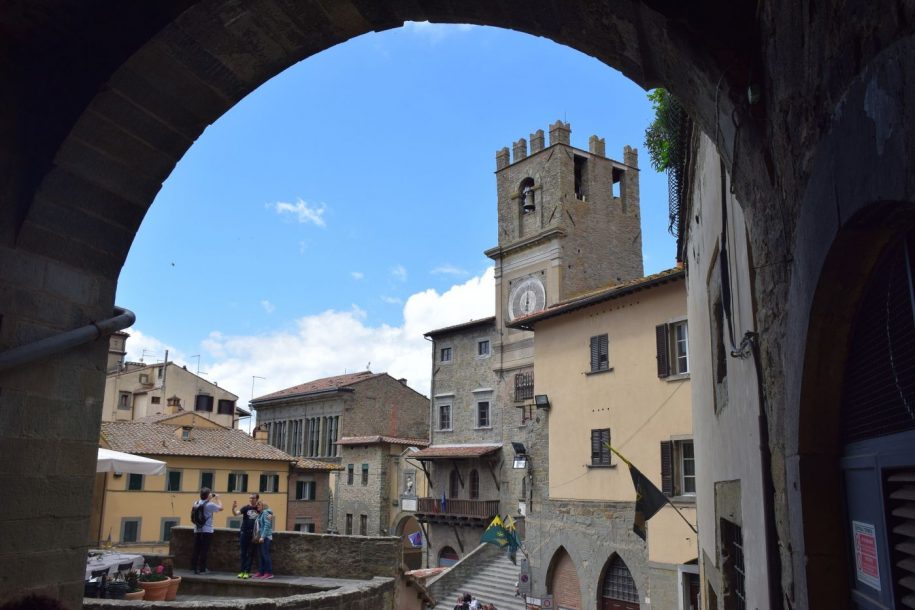 In this blog series, we take a (virtual) walk around the town to discover the fascinating history behind Cortona’s most beautiful streets, alleys and squares.

According to Virgil, an ancient Roman poet of the Augustan period, the town was founded by the legendary Dardanus, son of Jupiter and Elettra, who also founded the city of Troy, of Iliad fame. Dardanus, as told by Homer in the Aeneid, was born in this area and here, during a fight, lost his helm when struck by a spear.
The helm could not be found after the fight and a fortune-teller said that it had been swallowed up by Mother Earth, because in that place a town with towers will be built, a town as strong as Dardanus’ helm. So it was that Dardanus built a new town by the name of ‘Corito’ (helm), from which the name Cortona derives.

However, this is not the only legend surrounding the origins of Cortona.
Another tale sets the origins of Cortona in Noah’s time: after the Universal Flood, the patriarch, sailing over the river Tiber, arrived in the Valdichiana valley and here remained for a few years. One of Noah’s sons, Crano, was the one to build Cortona and his kingdom was called ‘Turrenia’ for the presence of many towers.

Numerous archaeological remains tell us another story. It is probable that between the 8th and 7th century b.c. the Etruscans settled here. They built the walls surrounding and protecting the town, still visible today. As Cortona is built into a hill, the position afforded a strategic advantage for its inhabitants, as they were able to see adversaries coming from miles afar and prepare for battle in advance. This allowed Cortona to thrive and it became a ‘Lucumonia’ or a city-state with its own laws and coinage. The Etruscan civilization was very prosperous and advanced, many features of this culture were adopted by the Romans, their successors to power in the peninsula.

It is still possible to visit Etruscan monumental tombs near Cortona, for example, Tumulo del Sodo, an archeological site where one of the longest inscriptions in the Etruscan language was found (Tabula Cortonensis). This language hasn’t been deciphered yet and remains a mystery to this day.

At the end of 4th century b.c., Cortona was conquered by Rome. The people of Cortona united with the towns of Arezzo and Perugia to fight the Romans but were defeated.
On June 21, 217 a. C. the town bore witness to one of the most important episodes of the Second Punic War, when the Roman army lost a battle against the Carthaginians of Hannibal, on the banks of nearby Lake Trasimeno.
A testimony of this period is the beautiful Roman Villa of Ossaia (outskirts of Cortona). Visitors can admire a polychrome mosaic depicting two fierce animals and one with geometric design, a ‘gliradium’ (a terracotta vase used to breed dormice), laminates in bronze with imperial portraits and personal ornaments in bronze and bone.

After the fall of the Roman Empire, a period of decadence began for Cortona: the city was ruled by the Goths and then invaded by the Longobards. Charlemagne put an end to this in 774.

As many towns in Italy at the time, Cortona became a free municipality in the 13th century, mostly supporting the Ghibellines.
The Guelphs and Ghibellines were factions supporting the Pope and the Holy Roman Emperor, respectively, in the Italian city-states of central and northern Italy. During the 12th and 13th centuries, the rivalry between these two parties formed a particularly important aspect of the internal politics of medieval Italy. The struggle for power between the Papacy and the Holy Roman Empire had arisen with the Investiture Controversy, which began in 1075 and ended with the Concordat of Worms in 1122. The division between the Guelphs and Ghibellines in Italy, however, persisted until the 15th century.

It is during this period that the buildings we can still admire today in Cortona were built. For example, the two squares of Piazza della Repubblica and Piazza Signorelli were previously just one square, where the Cardo and the Decumano of Roman heritage intersected.
Construction began at this time of new buildings, which resulted in the two separate squares and the picturesque edifices surrounding them, including the Palazzo del Comune (the town hall) and Palazzo del Capitano del Popolo (now Palazzo Passerini, named after a cardinal who subsequently owned it).

Since 1400, the story of Cortona is weaved with that of Florence and the Medici ducal family.
Cortona’s military importance grew and thus the Girifalco fortress was built on the foundations of a medieval fortress. It was erected on the highest point of the city, at the wish of Grand Duke Cosimo I of the Medici family, by Gabrio Serbelloni (nephew of Pope Pius IV) and Francesco Laparelli. It can still be visited today and the most beautiful panorama can be enjoyed from here. There are two ways to get here: by car, there is a road leading up to the parking lot in front of the church of Santa Margherita a few meters below or on foot, by climbing the steep alleyways of Cortona.
In the 1500s, Cortona flourished even more and stunning churches and palaces were also built.

As Cortona remained under Florence’s government, it enjoyed many years of peace, until 1799 when Napoleon tried to conquer it but failed. The people of Cortona then voted in 1860 to be part of the new unified Reign of Italy, taking part in the plebiscite Florence organized.

Via Rugapiana or Via Nazionale and Piazzale Garibaldi

As Cortona was built into a hill, most of the alleys, streets and roads have some degree of inclination, with most of them entirely uphill. Via Nazionale, as it was later named, it is known amongst locals as Via Rugapiana, meaning the only street that’s flat. This is Cortona’s main street, lined with restaurants, shops and ice-cream parlors. Via Rugapiana is also the first one to greet visitors as they arrive in Cortona, as it is not possible to drive further. Taxis and the shuttle bus from the train station all stop in Piazzale Garibaldi, a square just a few steps away, with a beautiful view of the Valdichiana valley and Lake Trasimeno. This square also has another name, ‘della carbonaia’, because here coal – mined from the nearby mountains – used to be sold. The quaint church of San Domenico was built here as well, a Gothic-style church dating back to 1230.