From the heart of Italy: the gorgeous apple 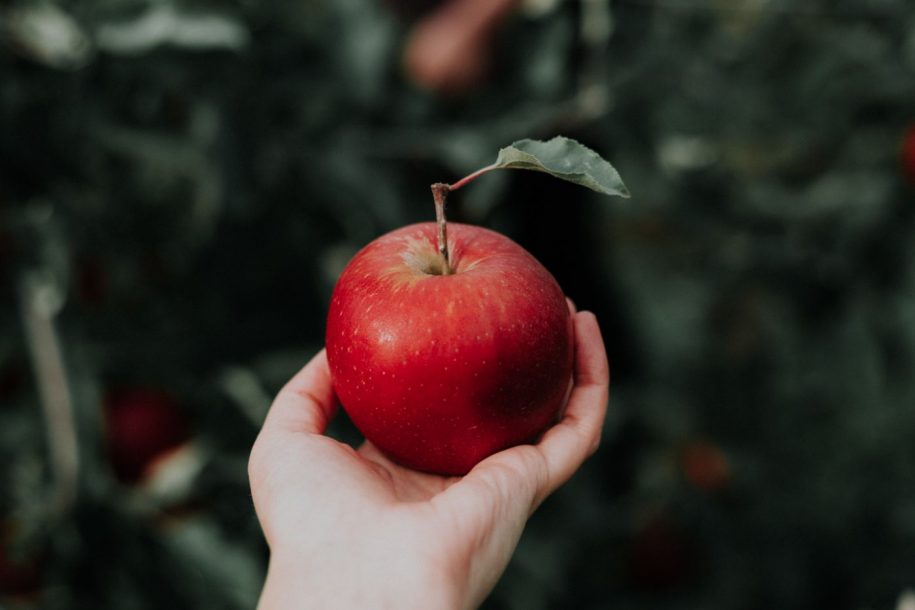 Many things come to mind when talking about Italy but the apple isn’t one of them.
If in the States people often say “as American as apple pie” and strudel is one of the symbols of Tirol, in Italy apples are largely associated with the mountainous region of Trentino. Here’s where the largest production of the delicious fruit concentrates but it’s not the only place where they can be found.

History of apples in central Italy

Both Tuscany and Umbria have their particular varieties of apples and cultivation of the “malus domestica” was well known in Etruscan times already. This civilization, which preceded the Romans in central Italy, made great progress in this regard. Later on, Teofrasto (323 b.c.) describes six varieties indicating how crop cultures, including grafting, were indispensable to optimize production, and how direct sowing normally yielded lower quality fruits. The illustrious writer Plinio, will then list up to thirty varieties known in Rome.
In the Middle Ages, peasants and monks from all over Europe produced numerous and varied apple qualities, which would then be the basis of an active selection in the Renaissance era.

A guide to apples from Tuscany and Umbria

If you’re on vacation in Italy in September and October, here’s a handy list to navigate the greengrocer’s offering.
Mela Carla Aretina: pale red and hard pulp.
Mela Casciana or Rosetta: round and slightly flattened in shape, aromatic and sweet tasting.
Mela Casolana: beautifully red with a hard pulp, it can be found in Monticano near Siena
Mela Francesca Aretina: crunchy and aromatic.
Mela Roggiola: with a rusty brown peel.
Mela del Casentino: green with pink streaks, very fragrant and aromatic.
Mela Panaia: it can be found in the Valdarno region, it’s great either fresh or cooked, it keeps well for almost six months.
Mela Rugginosa della Valdichiana: sapid and consistent, it keeps well for up to three months.
Mela Stayman: local to Valdichiana, it’s red and almost sparkling in flavour.
Mela Pera: medium small fruit, with an oblong shape.Thick, yellow, covered with diffuse rust. White pulp, acid, aromatic and crunchy. Local to Tuscany and Umbria.
Mela Agostina: widespread in Umbria, it’s a medium small fruit, roundish, smooth, slightly flattened. Straw yellow, with pink streaks. White pulp, sweet and fragrant, almost liquid. For immediate consumption after picking.
Mela Toggia: Yellow green peat, completely covered with rust with a white pulp, slightly acidic, very aromatic and crispy. It is suitable for drying.
Mela Broccaia: local to Gualdo Tadino, near Perugia, it has a green or yellow peel with clear lenticels. Great for cooking.
Mela Costarella: hailing from Gualdo Tadino too, this apple is straw yellow with a few rose strips.
Mela Conventina: local to the Gubbio area (Umbria), it’s a medium large, oblong fruit with a yellowish green peel dotted with slightly rusty lentils. Aromatic and crisp.
Mela Rossa di Firenze: red, with a crunchy and juicy pulp.
Mela Nesta: an ancient quality, yellow and red, with a crunchy, acidic pulp.

A recipe from our chefs
Sidro di mele fatto in casa

Recommended by our chef Francesco, apple cider goes surprisingly well with a variety of dishes. A platter with seasoned ricotta cheese, mascarpone, as well as gorgonzola makes a great starter. Beef, roast chicken, boiled hen, lamb and pork are all exalted by apple cider, as it is vanilla ice cream, panettone and nougat.

To prepare homemade apple cider, you must have: a mixer, a densimeter, some containers, bottles and corks.

First, cut apples into small pieces and put them in a bowl to rest for 6-8 hours at about 12-15 ° C, then put into a mixer. The obtained juice must have a sugar level greater than 1,045 (use the density meter); in case it is less than that, add sugar. Let the juice ferment in a sealed container at a temperature of 10-12 ° C for 8-15 days.
When the cider is clear with a darker layer on top, pour the clear liquid into another container. Store for another 10-15 days and if the cider level lowers, top with more apple juice. When the sugar level is about 1.035, pour the liquid into another container. Check with the densimeter the sugar level to determine when to stop fermentation:
Very spicy and sweet 1,020
Sparkling and sweet 1,018
Sparkling and semi-dry 1,012
Less sparkling and dry 1,005
At this point, bottling can be carried out, preferably using thick glass bottles.